I wrote this song on the fly while working with Wisconsin Democrats for the 2004 Presidential Election.  Hundreds of us were at a huge high school gym outside Milwaukee making phone calls to voters, urging votes for John Kerry for President (running against George W. Bush) and Russ Feingold for Senate (running against Tom Michaels).
We had spent most of the weekend canvassing door-to-door, handing out literature and getting information about likely voters for our candidates so that they would be reminded to vote on Election Day, and also finding out who might need rides to the polls.  I was doing similar work in Illinois.
After hours of this we assembled in a large high school gym to enjoy refreshments and hear from speakers, including the candidates who were making the rounds of these events.
Then the Master of Ceremonies asked if anyone would like to speak and to tell why this election was so important to them.  Several people spoke and their stories were wonderful!  While I was listening I was also writing on a scrap of paper.
After a while there was a lull in volunteers, so I went up to the microphone and asked if I could sing a song.  The M.C. asked if it was clean!  I handed him the notes I'd just written and he asked me my name and announced that we had "our own Joni Mitchell" to sing for us, and handed me the mike.
I quickly taught the crowd the "chorus" of "Tuesday Morning Patriots" and invited them to sing along with with each one.  Right away they were singing along with every chorus, clapping their hands and stamping their feet time!  The applause was terrific!   I'm happy if it inspired these wonderful people who came out to work for this election and so many others!
Later I was thrilled to receive such a kind note from renowned songwriter-singer Joe Glazer -- also posted below.
I think this song would be appropriate for 2020 as well, so I'm reprinting it here.  I must say that even though he was not our candidate back in 2004, George W. Bush looks pretty darned good today!
Original music is printed below but music for Battle Hymn of the Republic works too! Try it!

Our loyal troops in uniform are on the line for you,
They do their job at any cost, I’m grateful that they do.
But all of us can join the fight wherever we may be,
‘Cause Tuesday Morning Patriots will keep our country free.

Chorus (to be sung after each verse):
Yes, Tuesday Morning Patriots are marching to the polls,
To exercise their voting rights with fire in their souls,
With ballots, not with bullets,
They will send their message clear,
Our country needs good leadership,
The time is now, it’s here!

Our right to vote has been secured by fire, blood and sweat,
Millions struggled, fought and died, and we must not forget!
Don’t let your country slip away, just let your voice be heard!
Just SHOUT into that ballot box, they’ll hear your every word!

Never say that one small vote can’t turn this land around,
One plus one, a million strong, will make a mighty sound!
You have the choice: do nothing, and nothing's what you'll get,
But take a small step to the polls, you'll make a winning bet!

Make no complaint November fourth* when we get the news,
Of who will be sworn in to lead and who gets walking shoes;
Don't wait! November third* join voters proud to serve,
And let the slackers who stay home get just what they deserve! 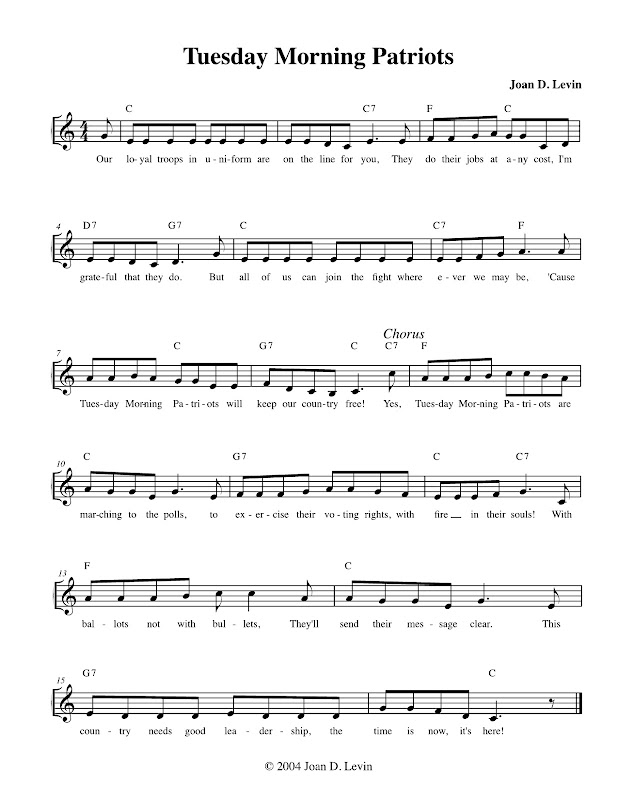 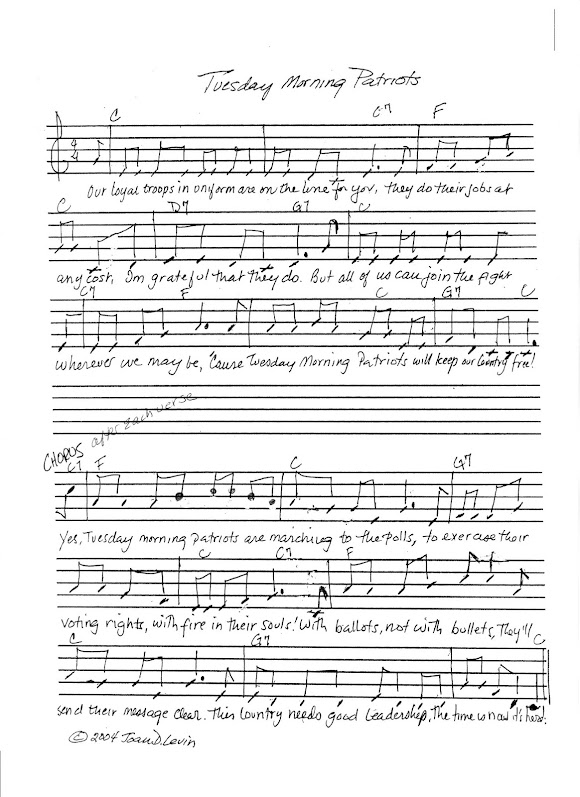 I sent this song to Joe Glazer and received this lovely response! 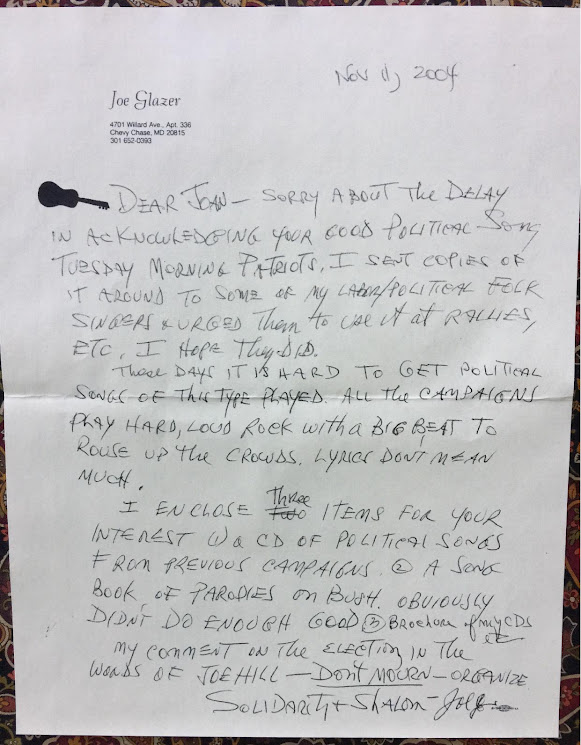